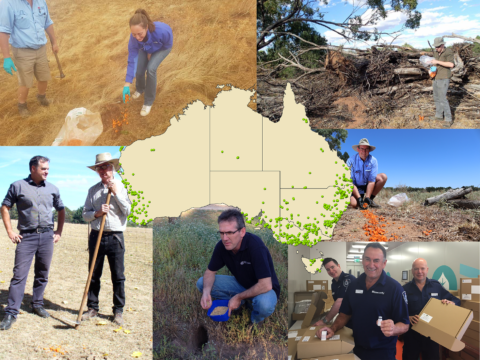 Thirty-eight RHDV variants and RHDV-like viruses were imported and evaluated as part of this work. Seven of these were selected for further testing, and as a result a Korean strain of rabbit haemorrhagic disease virus, known as RHDV1-K5, was recommended for release in to Australia as it showed an ability to overcome the partial protection offered by the endemic benign calicivirus RCV-A1 – see the final report here. It is important to note that as part of this work, the current vaccine, Cylap was tested for efficacy against RHDV1 K5, of which is showed to be able to provide protection against this strain – see the Read and Kirkland 2017 paper.

Following extensive preparations for a community-led component, the project recruited 323 community release sites in addition to the 18 intensively-monitored sites (of which 9 were release sites).

In March 2017, the project culminated with the release of RHDV1-K5, the first national release of a new rabbit biocontrol agent in 20 years creation. At the same time, the project also formed a National Rabbit Biocontrol Monitoring Program which has been able to track virus impact across Australia.

Data analysis from the RHDV1 K5 release has shown a national average reduction of 34% post release at the 219 citizen science sites. The intensively-monitored sites showed no significant change in quarterly rabbit growth rate following the release.

As part of the National Rabbit Biocontrol Monitoring Program, laboratory tools were developed to determine the impact of different viruses, including RHDV1-K5 and RHDV2. On-line rabbit-specific disease observation tools (embedded within RabbitScan) allowed participants within the community release sites to track of the spread of RHDV1 K5 through the rabbit population.

The project also showed that community monitoring is a powerful tool to mobilise individuals and groups and extend the reach of a research project far beyond what is possible with traditional science approaches.

Another component of the project was to select additional RHDV strains for future release. The project team was able to demonstrate that experimental selection of a novel strain with an altered surface protein and different immunological properties was possible, however, attempts to further select this strain for the ability to overcome immunity to existing RHDV strains were unsuccessful.

The project findings suggest that: