Behaviourally effective communication and engagement in the management of wild dogs

Changing behaviour, and sustaining these changes over time, is difficult. Educating the public about the negative impacts of wild dogs and providing information about control strategies is rarely enough to initiate and sustain practice change. Best practice community engagement requires a combination of practical ‘soft skills’ for facilitating dialogue and designing equitable processes, with in-depth understanding of the factors that prevent landholders from adopting best practices for managing wild dogs on their properties. This project uses behavioural science principles to assist wild dog facilitators to understand and engage more effectively with non-participating landholders.

Lynette is a Postdoctoral Fellow at the University of New England. Her primary research field is environmental psychology, concentrating on the application of human behaviour change approaches to improve current extension and adoption practices. Current research projects have covered a variety of environmental and agricultural issues, including domestic cats, wild dogs, widespread weeds and chemical spray application. Lynette has over twenty five years of experience working in invasive mammal management with NSW DPI, Local Land Services and community groups. In 2017 she completed a PhD on human behaviour change and domestic cat containment. 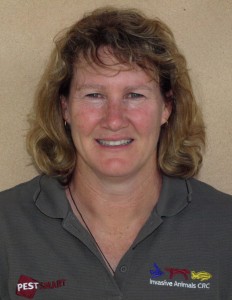 Four landholder profiles were identified for participation in coordinated control activities, two of which were of interest: Non-controllers and Individual controllers.

Engagement with a broad audience was achieved through a keynote address at the Australian Biosecurity Symposium. Interest has been expressed in applying a behavioural approach to other topics such as Phytophthora dieback, community fox projects and biodiversity conservation.

A human research ethics application was approved allowing interviews with wild dog coordinators and other key stakeholders to progress. Rural landholders were surveyed from VIC, QLD and NSW. Survey results and discussion with stakeholders identified four key behaviours to target in the next step of the project. Engagement and communications interventions tailored to each of the identified landholder segments, including evaluation strategies will be co-developed with stakeholders.

Negotiations are underway to include a ‘behaviour change’ masterclass in outreach sessions in the upcoming Australasian Vertebrate Pest Conference. Development of another landholder survey to explore COM-B barriers and drivers of selected key behaviours is underway. Data from this survey will inform the next research phase of determining leverage points for behaviour change and designing relevant interventions.

Stakeholder interviews were conducted to identify key landholder behaviours associated with wild dog management. These stakeholders were a mixture of wild dog coordinators, researchers and personnel from organisations involved in wild dog management from across Australia. They were contacted a second time to rate the impact of each of the identified key behaviours to further assist in the behaviour selection process.

Completion of the interviews have identified 17 key behaviours for wild dog management.

Commencement of the rural landholder survey using an online questionnaire will help further understand these behaviours so that appropriate engagement tactics (behaviourally effective) can be utilised.