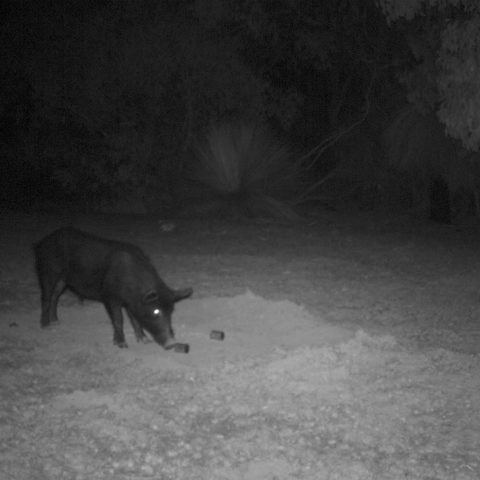 With exotic diseases such as African Swine Fever a growing threat to Australia’s $5 billion per year pork industry, the need for strategic and landscape scale management tools for feral pig management is also growing to ensure we reduce the number of feral pigs within Australia who are all potential vectors of disease.

In 2005, a 14-year innovation pathway began from a PhD discovery through to a market ready product, known as the HOGGONE® meSN® Feral Big Bait.

The HOGGONE® product uses sodium nitrite, an approved food preservative that in low doses can kill pigs quickly in overdose. HOGGONE® is humane and kills by oxygen depletion to the brain and tissues (known as methaemoglobinaemia).

Pigs are more susceptible than other species because they have a limited amount of a protective enzyme that reverses the effects of sodium nitrite.

During testing, HOGGONE® baits consistently reduced feral pig activity by 70–90% in field studies. The results of the R&D were then developed into a registration package for the APVMA and submitted in late 2017.

Many field experts in Australia and the USA, contract toxicological labs, regulatory consultants, formulation technologists at GEA Pharma systems in Europe and Australia, analytical groups, tooling designers and manufacturers in several countries also contributed. The generous efforts of field staff and landholders who have assisted with extensive testing was crucial.

Partial funding support has come from Aus Industry Accelerated Commercialisation Program, Meat and Livestock Australia (MLA) and the Australian Federal Government Feral Animal Program, the USDA National Feral Swine Damage Management Program. Without such a team the project could not have been completed!

Where can I find it?

HOGGONE® is available to purchase as a Schedule 6 product, to be used in conjunction with a delivery system such as the Hoghopper®.

It can be purchased through Animal Control Technologies Australia (ACTA) with appropriate licences for use.