In the most comprehensive investigation to date, Australian scientists have declared that wild dogs in urban areas carry a range of parasites that pose a risk to public health.

The research, published in the journals Wildlife Research and Australian Mammalogy identifies that four in five wild dogs tested were infected with parasitic worms known as helminths, and over half of wild dogs tested were positive for a hydatid tapeworm known as Echinococcus granulosus (pictured below), which can cause disease in humans, if they come in contact with infective eggs which are shed into the environment through wild dog faeces. 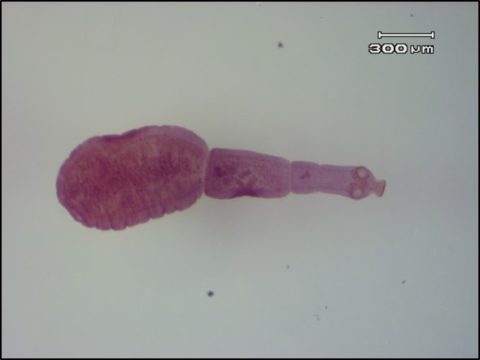 “Wild dogs can live within 1000 meters of residential houses at all times, and repeatedly cross roads, suburban backyards and frequently utilised public areas such as school yards and parklands.

“Urban areas such as south east Queensland are highly populated and home to more than 3.4 million residents, and this research is prompting new strategies to minimise the risks wild dogs could pose to human and animal health to protect native wildlife, domestic animals and the public.

Dr Harriott’s initial research, which was undertaken as part of her PhD supported through the Invasive Animals Cooperative Research Centre, also found that wild dogs preyed heavily on macropod species, such as the swamp wallaby, and this could be a significant reason for seeing such a high occurrence of the hydatid tapeworm within wild dog populations.

“We analysed the stomach contents of 170 urban wild dogs for prey and then associated this with their known infection status of key zoonotic pathogens. Wild dogs that had adult hydatid tapeworms in their intestinal tracts were significantly more likely to have consumed swamp wallabies. 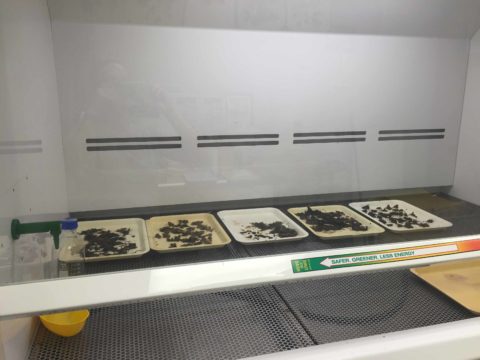 “The findings demonstrate the importance of managing the complete tapeworm lifecycle and the important role that wild dog diet plays in the ability for the tapeworm to survive.

In Queensland, the wild dog is a restricted invasive animal under the Biosecurity Act 2014. Under this Act, everyone has a general biosecurity obligation to take reasonable and practical steps to prevent or minimise the risks associated with all biosecurity matter, including invasive animals, under their control.

This research improves our understanding of the potential impacts of wild dogs in urban areas so that management strategies and options can be developed for land managers. It identifies the importance of protecting domestic dogs from these threats, through ensuring they have regular worming, as well as the importance of personal hygiene particularly for professional wild dog controllers. These simple steps can all assist in mitigating the risk posed by parasites carried by the urban wild dog population.

The research paper titled “The association between diet of peri-urban wild dogs and zoonotic pathogen carriage” can be downloaded through Australian Mammalogy.

Further information on management of wild dogs in urban areas you can visit our PestSmart website – https://www.pestsmart.org.au/peri-urban-wild-dog/