A newly released report by the Centre for Invasive Species Solutions is set to guide the development of new genetic biocontrol technologies that could potentially provide managers with a game-changing advantage
over key vertebrate pests.

The report, Genetic Biocontrol Technology for Vertebrate Pests: Decision Framework Summary, is the culmination of a three-year Centre project led by CSIRO and two Western Australia government departments — the Department of Primary Industries and Regional Development and the Department of Biodiversity, Conservation and Attractions.

The project was overseen by a steering committee chaired by Dr Margaret Byrne which included representative from three Australian governments, conservation land trusts, CSIRO, key researchers and staff from the Centre. 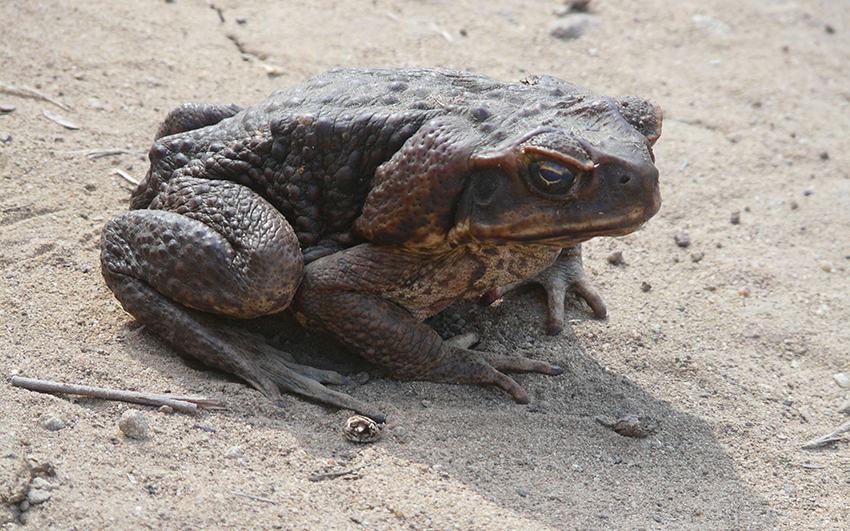 Cane toads were identified as an important target pest species for the development of future genetic biocontrol technologies.

The report compares the relative importance of six target pest species against eight technical, social, ecological and economic imperatives. These imperatives were drawn from pest research and extensive consultation with management stakeholders.

Feral cats were another species considered. The research recognised the ecological imperative and lack of strategic effectiveness of current controls, but determined that further work is first needed to resolve knowledge gaps in biology and ecology.

The decision framework is based on a combination of published data, expert opinion, and stakeholder input to estimate investment priorities for proof of concept for genetic biocontrol in vertebrate pests included in a roadmap to implementation.

The report highlights the substantial benefits from a centralised system for integration, coordination and communication of genetic biocontrol knowledge given the complexity of the stakeholder and researcher environment in Australia.

While shown to work in invertebrate pests, effective genetic biocontrol approaches have not yet been demonstrated for vertebrate pest species. This is a research priority in the Centre’s biocontrol program with proof of concept work currently underway for zebra fish (as a fish model specie, and laboratory mice (representative of a mammalian model system).

Consultation with stakeholders highlighted that investment in new technologies for vertebrate pest control must show increased efficacy and humaneness over current techniques, prove to be safe, generally acceptable to the wider community and without negative trade impacts.

If the current proof of concept studies for zebra fish and laboratory mice are successful, testing of an effective genetic biocontrol technology will require rigorous contained trials followed by open field trials. The results from these trials would then form the evidence base required to meet regulatory approvals and licence requirements.