Home > News > The peril of ferals captured through national competition

The peril of ferals captured through national competition

The peril of ferals captured through national competition


Australia has voted and foxes, feral cats and feral deer have taken out the popular 2021 Centre for Invasive Species Solutions (CISS) feral photos and video competition, with some compelling imagery showcasing just how brazen these feral animals are.

Covering all states and territories across Australia, 295 entries were submitted into the competition, where pest animals, weeds and even insects and parasites were showcased as part of the ‘feral’ categories.

Dr Ian McDonald, competition organiser and CISS Communications Manager said the winners were decided by a public vote of more than 2,500 online votes, with the top two winners receiving over 1,100 of these votes.

“There was such a wide range of images and video footage submitted to the competition, we were glad the decision on the winners were taken out of our hands and given to the public to decide.

“While I certainly had my favourites, all entries were worthy winners, so we knew we wouldn’t be disappointed with the final result, and of course only one could take the top gong,” Dr McDonald said.

Wildlife photographer Lucca Amorim won the competition with his entry called ‘the hidden observer’ which he took of a fox eyeing off some native prey, in Mudgee, NSW.

“I saw the juvenile fox early in the morning as I was driving along the roadside, and I was pretty certain it was hiding among the bushes to avoid being spotted by a naïve prey animal.

“I managed to snap some great shots as it peaked out, looking for its prey but seeing if any danger lurked.

“The image really captures the look in its eyes, and I am glad my image can raise more awareness of the threat foxes have on native wildlife,” Mr Amorim said.

As part of winning the first prize, Mr Amorim won a remote camera pack from Outdoor Cameras Australia worth a retail value of $2,500, which he will be using to capture unique wildlife shots across Australia.

The winners of second to fifth spot take us on a tour of Australia encompassing Victoria, South Australia, the Northern Territory and Queensland, really showcasing that invasive species are a national problem and as much an urban problem as they are a rural problem.

“Across the country we received entries from every state and territory, and a lot of video footage entered was taken in urban landscapes and captured from smartphones,” Dr McDonald said.

Second place was won by David Eastham who was out photographing local birdlife but instead caught a glimpse of ferals in action with a fox chasing a rabbit.

“The fox returned minutes later, bedded down, and waited for its next hunt. I whistled to it after sneaking in, and it looked right down the lens and I fortunately was able to snap this shot,” Mr Eastham said.

Taken on his property in the Yarra Valley, Mr Eastham uses remote cameras to understand the extent of the pest animal problem and does a lot of work with his local community to manage feral species.

Mr Eastham won a remote camera pack from Animal Trap Solutions as second prize and he will now be using this additional camera on his property to help inform him of future feral sightings.

Simon Ferguson took out one of the major prizes with his image of a feral cat wandering near Tennant Creek, being harassed by a native willie wigtail.

“Feral cat populations can be large in the arid lands of Australia, and this particular photo was taken near the sewage works which can be a haven for native wildlife,” Mr Ferguson said, who is also an employee at the Territory Wildlife Park.

Mr Ferguson won an Animal Traps Solutions ‘ATS-1’ Trap Device as part of his prize which he said will go straight to managing the feral animals in the region, including feral cats.

“We would like to thank all those who entered and voted in the 2021 competition,” Dr McDonald said.

“It exceeded our expectations, and we would again like to congratulate all the winners in such a competitive field.

“We will be showcasing many of the entries and their backstories via our social media channels over coming weeks so keep your eyes peeled,” Dr McDonald said.

You can view all the entries to the competition at https://feralphotos.invasives.com.au/feralphotos/entries

The top five winners are showcased below and all winners have received prizes thanks to our competition collaborators Animal Traps Solutions, CSIRO Publishing and Outdoor Cameras Australia. 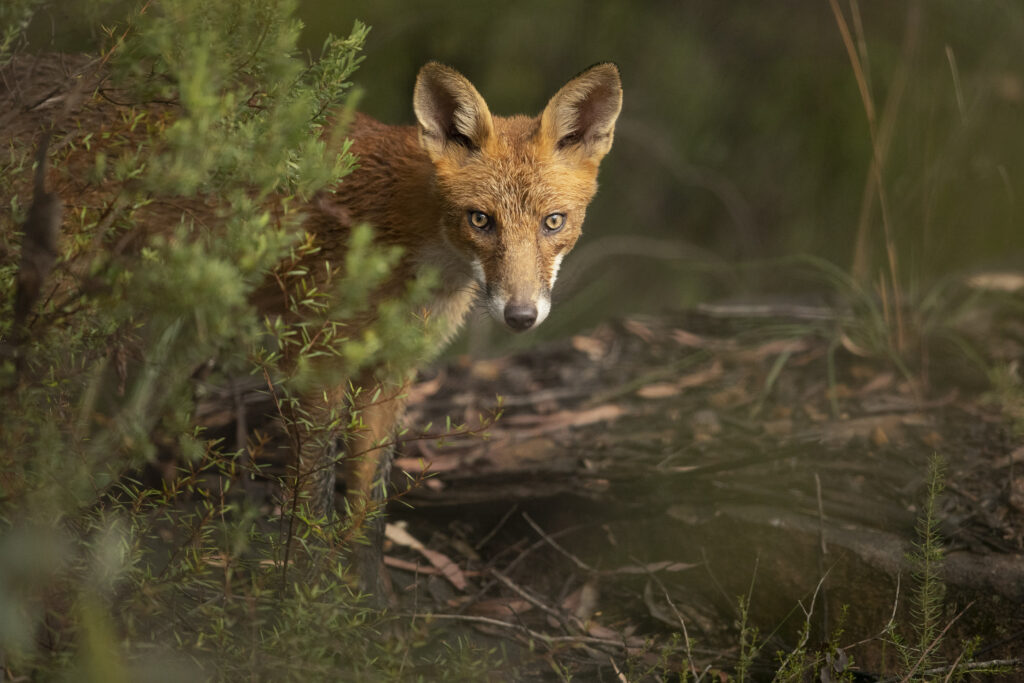 Lucca Amorim from NSW has taken out 1st place with 667 votes with ‘The Hidden Observer’.

A juvenile fox sets out to hunt and forage for food in the forest’s depths during the early morning. As it cautiously searches for prey, it moves quietly above the dense foliage and maintains a low profile to avoid being spotted. However, spotting an opportunity, it quickly hides behind a bush to observe the target and plan an attack. Young and inexperienced, the hesitant fox slowly abandons the idea of chasing its prey and finds comfort in observing it while its longing eyes slowly watch the animal leave the surrounding area. 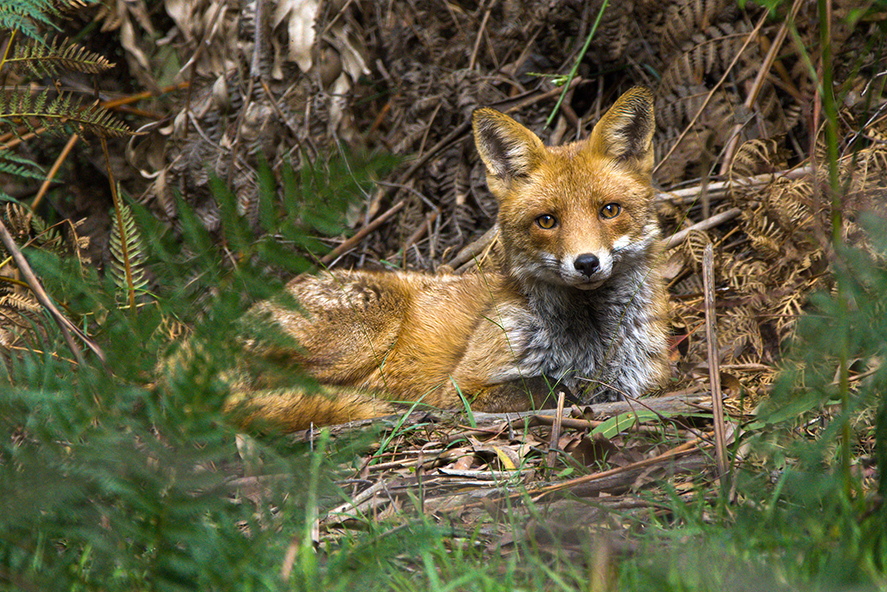 David Eastham from Victoria has taken out 2nd place with 521 votes with ‘Always Watching’.

I was out photographing our local birdlife when this fox took off chasing a rabbit. Minutes later it returned, bedded down, and waited for its next hunt. I whistled to it after sneaking in, and it looked right down the lens and fortunately was able to snap this shot.

Lara Winsor from SA has taken out 3rd place with 191 votes with ‘Urban Fox Scavenger’.

A local urban fox makes its dusk run through the neighbourhood scavenging food scattered for magpies. 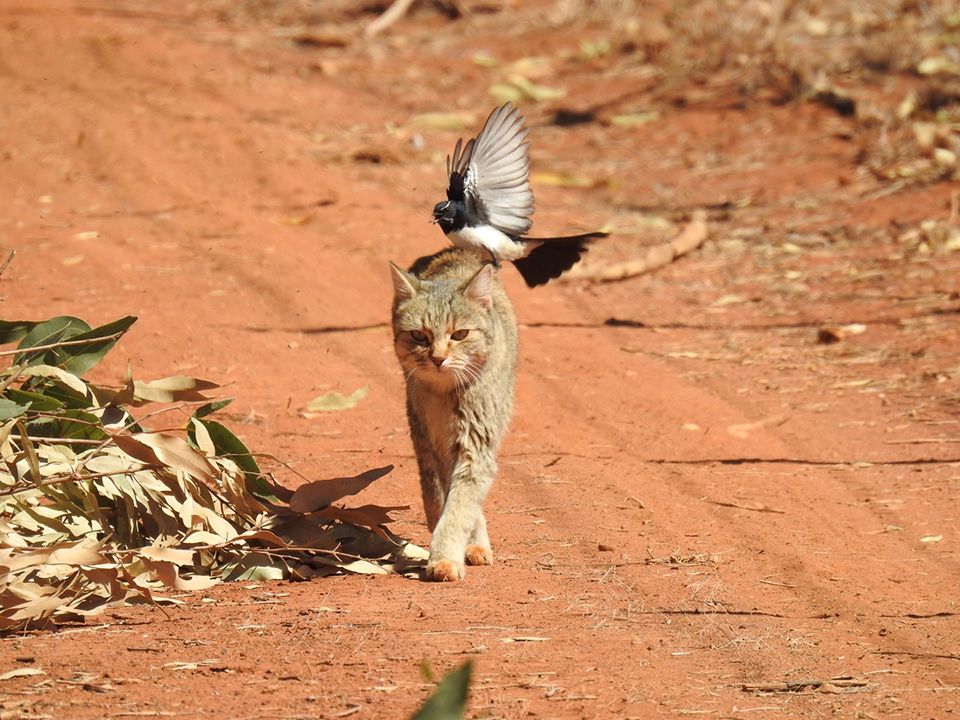 Simon Ferguson from NT has taken out 4th place with 171 votes with ‘Feral Cat Tennant Creek’.

Feral cat seen roaming the wilds just outside of Tennant Creek, being harassed by a Willie Wagtail. 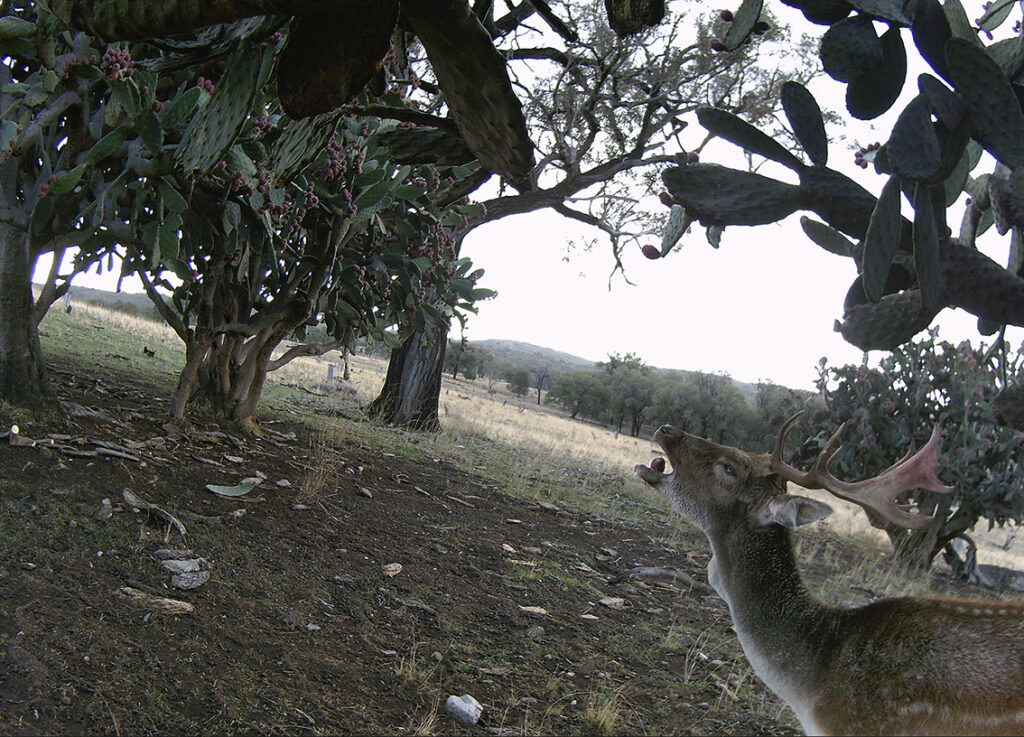 A fallow buck eating another invasive species (prickly pear) in the Stanthorpe Region. 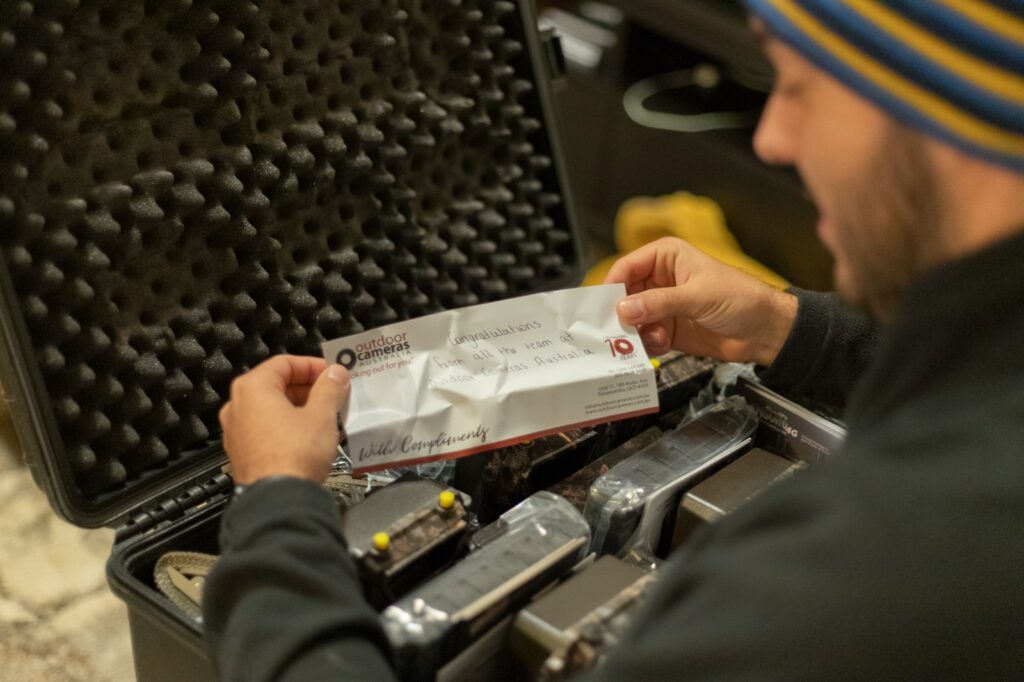 Lucca Amorim has won the Centre for Invasive Species Solutions Feral Photos and Video Competition for 2021, and received an Outdoor Cameras Australia remote camera pack worth a retail value of $2,500.