The Centre for Invasive Species Solutions (CISS) is honoured to receive one of the Australian Governments’ top biosecurity awards for its role in coordinating the release, monitoring and evaluation of a new rabbit biocontrol agent – the first nationally coordinated release in more than 20 years.

“The release and subsequent monitoring and evaluation of RHDV1 K5 was a massive combined effort with investment and support from the Australian Government, all state and territory governments, the CSIRO and the livestock industry through Meat and Livestock Australia (MLA) and Australian Wool Innovation (AWI).

“Since 2009, the collaboration ensured that RHDV1 K5 was rigorously tested, assessed, registered and released at a national scale, consistent with our Centre’s rabbit biocontrol pipeline strategy outlining the need for new and additional biocontrol tools every eight to ten years, to keep rabbit populations at bay,” Mr Glanznig said.

“As part of this National Program, laboratory tools were developed to determine the spread and impact of different viruses, including RHDV1 K5 and RHDV2; an incursion of a new virus discovered in 2015.

“Thanks to the support of the community, the Program collected more than 230 community release site data sets and has analysed more than a thousand rabbit tissue samples to paint a map of rabbit virus distribution in Australia over the past two years, with all data fully available to view online.

“Based on data collected through the strong collaboration with the community sites we saw an average reduction in rabbit numbers of 34%, one-month post release,” Dr Strive said.

Dr Jane Littlejohn, AWI General Manager of Research reiterated the importance of industry support and investment in such national collaborations.

“Both AWI and MLA are proud to involve ourselves in these national collaborations to ensure we are getting strategic vertebrate pest management tools into the hands of farmers, producers and land managers quicker, ensuring value for money and effort.

“We continue to invest, with MLA, in the Centre’s rabbit biocontrol program and look forward to it further develop and progress,” Dr Littlejohn said. 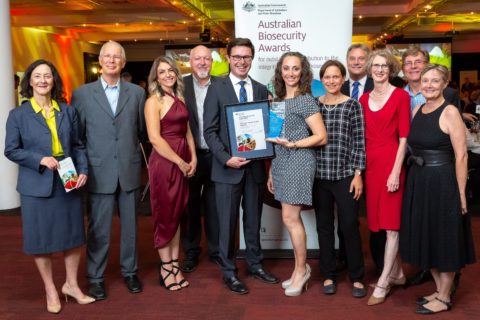 Centre for Invasive Species Solutions board directors, staff, project leaders and and collaborators pictured with the the Hon. David Littleproud MP Minister for Agriculture after receiving the Australian Biosecurity Award – Industry category, at the awards ceremony in Canberra last night